This short 5-day tour of Myanmar takes you to the former capital city of Yangon (Rangoon), the leafy Garden City with a wonderful blend of golden pagodas and British colonial architecture, Bagan (Pagan), one of Asia’s richest archaeological sites and Mandalay, the last royal capital of Burma. Walk along the U Bein bridge in Amarapura, climb the 1,729 steps up to Mandalay Hill and take a local riverboat across the Ayeyarwady (Irrawaddy) to Mingun, to see the largest ringing bell in the world and the unfinished Mingun Pagoda. 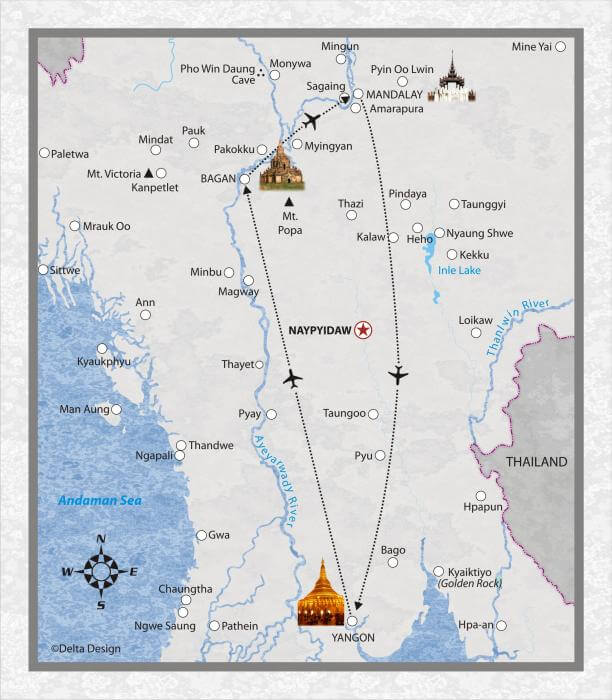 You have questions? Then please contact us! We will be happy to help you customize your own dream trip. 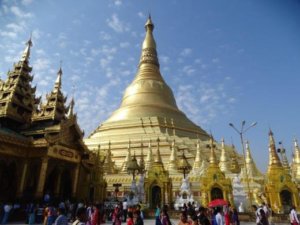 Upon arrival at Yangon International Airport: welcome by our local tour guide and transfer to your hotel. On your first walk through the city centre of Yangon and to the riverbank, you will see many notable sites from the colonial and religious past of this garden city. Old Rangoon was built based on designs by Dr William Montgomerie. He was a senior military physician who learnt about construction planning from Sir Stanford Raffles in Singapore. All culturally significant buildings in Yangon are listed as historic monuments. You’ll then enjoy ‘high tea’ at the Strand Hotel which was built in 1896 and was formerly known as the ‘the finest hostelry East of Suez’, and late afternoon, climb up the steps to the world-famous Shwedagon Pagoda, which Somerset Maugham described as follows: “The Shwedagon rose superb, glistening with its gold, like a sudden hope in the dark night of the soul of which the mystics write, glistening against the fog and smoke of the thriving city”. This massive, bell-shaped stupa rises 100 metres above its hilltop surroundings. Wander through this magnificent structure and its courtyards, stupas, bells, temples and Buddha images and observe religious and secular visitors from all over the world. Shwedagon has become the symbol of Myanmar. Enjoy the sunset over the pagoda. You will spend the night in Yangon. 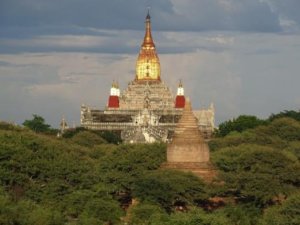 Transfer to airport for your early morning flight to Bagan (departure time between 06:00 and 07:00), once the most important temple and pagoda city in Southeast Asia, on the eastern bank of the Ayeyarwady. Upon arrival, traditional breakfast in a local teahouse. Full day sightseeing tour of Bagan with a diverse selection of the most important pagodas and temples, such as Shwezigon Pagoda, built by King Anawrahta in the early 11th century as a religious shrine; the Gu Byauk Gyi Temple, a temple with exquisite murals of Jataka scenes; the Ananda Temple, with four huge standing Buddha images and numerous seated figures in niches around the galleried interior and the Shwe Gu Gyi Temple, noted for its fine stucco carvings and panoramic views of the area’s many monuments. In the afternoon, travel by horse-drawn carriage to Myinkaba, which is located two kilometres south of Bagan. This village is known for its lacquerware and also has a number of interesting temples, such as the Nanphaya Temple, which is reputed to have been the residence of King Manuha at one time, and the Gu Byauk Gyi Temple, with its extremely beautiful interior frescos. From the top of one of the higher pagodas, you can round off the day by enjoying the sunset view of the pagoda fields and the Ayeyarwady River. You will stay overnight in Bagan. 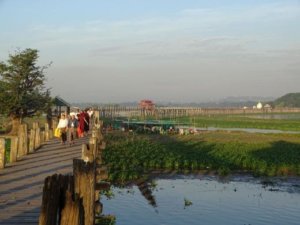 Transfer to airport for your morning flight to Mandalay, the last royal capital of Burma. Upon arrival, travel to Amarapura. The ‘City of Immortality’, located around eleven kilometres south of Mandalay, was the capital of Upper Burma until 1850. Along with the surviving pagodas, the ancient silk- and cotton-weaving tradition using handlooms is very much alive there. You will take a rowing boat across Taungthaman Lake to the picturesque village of Taungthaman; return to Amarapura via the U Bein bridge, which, at 1,200 metres in length, is one of the world’s longest teakwood bridges; and visit a mill where the art of weaving is still performed using handlooms. In the afternoon, visit the Mahamuni Pagoda with its gilded Mahamuni Buddha, the oldest Buddhist statue in Myanmar, the Shwenandaw Monastery, which is famous for its exquisite wooden carvings, and the Kuthodaw Pagoda, which, owing to its stone tablets with Buddhist inscriptions, is famous for containing the world's largest book. Later on, enjoy the sunset from Mandalay Hill, a vantage point offering panoramic views of the city. You will spend the night in Mandalay. 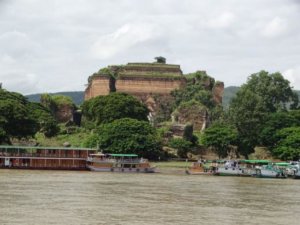 After breakfast, set off on your half-day excursion to Mingun. At the jetty, you will have enough time to observe the lively riverside goings-on and take a riverboat trip to the ancient capital city of Mingun (approx. one hour each way). Visit the Settawya Pagoda, with its Buddha footprint, and the Mingun Bell, the largest ringing bell in the world; view the nearby unfinished Mingun Pagoda, built to be the world’s biggest pagoda and visit the Hsinbyume Pagoda, a replica of the mythological Mount Meru. Return to Mandalay, leaving enough time to visit some of the famous craft workshops, such as wood-carving and marble workshops or gold leaf production. Return flight to Yangon in the late afternoon. Upon arrival, transfer to hotel, check-in and overnight stay. 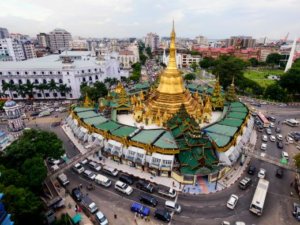 You will have the morning free. Explore the Burmese metropolis on your own! If you’re feeling in the mood and want to experience the Burmese culture up close, then just take an interesting tour on the public ‘City Circular Train’ (circular railway) or a leisurely stroll through the Bogyoke market (closed Mondays and public holidays) for some last-minute shopping. There is a wide range of items for sale, including: wooden carvings, bronze statues, lacquer, mother-of-pearl cutlery, longyis and much more. Afternoon transfer to airport for your return flight.

Supplement for German-speaking tour guide: US$ 332 per group

Supplement for Italian- or Spanish-speaking tour guide: US$ 304 per group

Do you have any questions?

Feel free to contact us. Our team will be happy to assist you.

Our offers for round trips in Myanmar 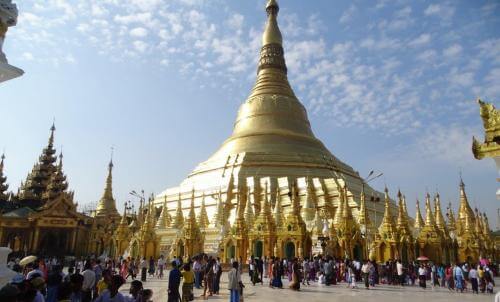 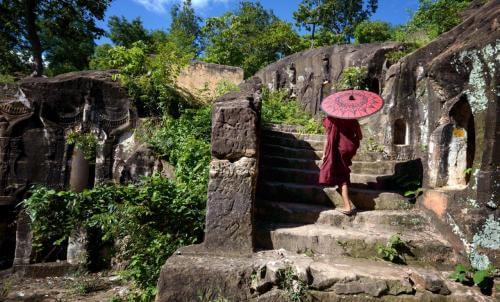 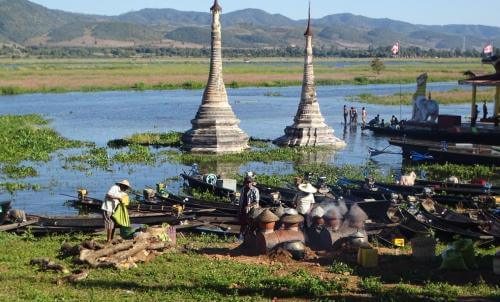 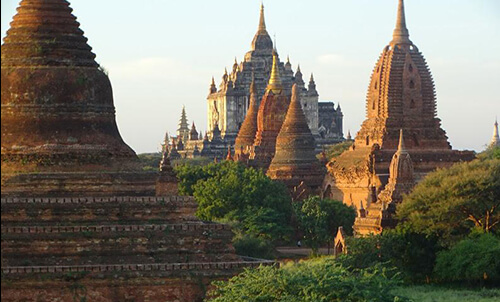 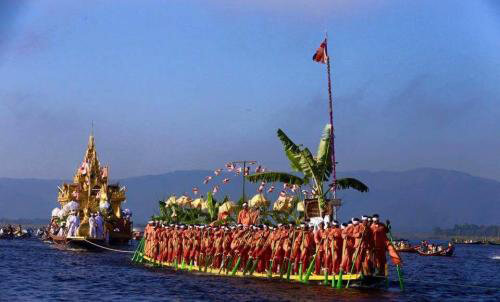 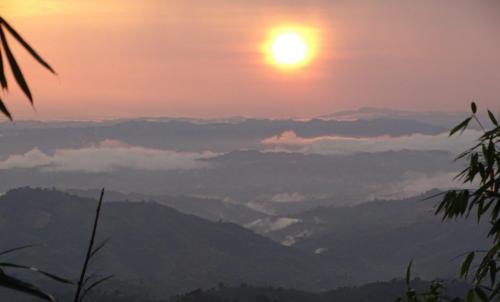 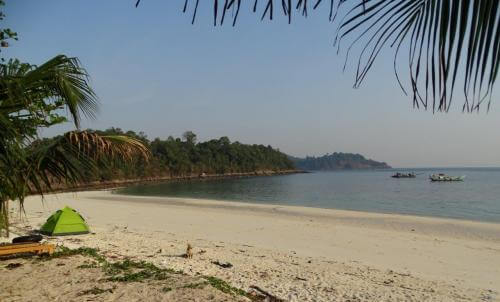 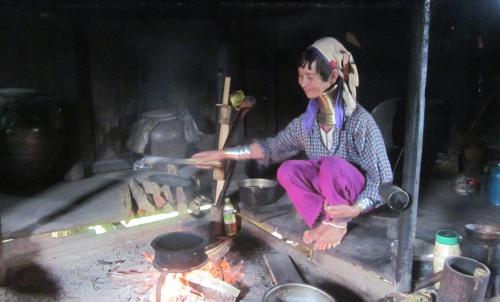